On March 15th, 1944, a man was born of steel and calloused fingers. He grew up in a small town on a little island in the west coast. He grew up strong, worked hard, died young. 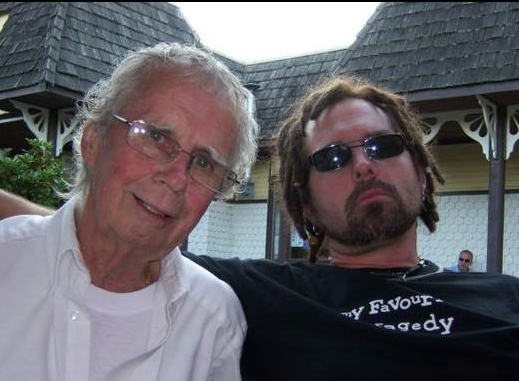 Gary Easton was my father. A welder by trade who later took to entrepreneurship. He built a very large vending business in Sonora California. Rode a Harley, loved his beer, his t.v. and his little dog. But that was all before I really knew him. That was before we became best friends. I wrote and recorded this weeks challenge on his birthday.

As the weeks roll on in this challenge, and we all dig deeper into our vaults of musical and lyrical ideas, we walk over bones that have settled in our closets. We kick up dust that is hard to see through and can very often take us to new places we didn't picture ourselves going.

Roadside Cross is an idea that has been brewing in my head for a number of years. I travel from Ontario to British Columbia by van every year in the summer. It takes 4-6 days depending on what we stop to explore. I have seen so many untold stories on the side of the road in the form of a wooden cross. Some with worn out flowers attached, or a teddy bear, or words like "Remember" "Forever Missed" "Tragic". There is a journey in my future regarding these crosses, but that is for another page.

Week 5 - Having a deadline to write a song adds a pressure that some may find as stressful. For others impossible. I would imagine that for some writers it may make them even angry if things aren't going the way they planned. For me...the deadline is fantastic. It brings an energy that truly fires me up. I can see that same light in many other writers still locked in and raring to go. I tip my hat again to you all.

The story of this particular song stems from an accident that happened when I was only a child. A man and his wife were driving down a steep hill in the pouring rain. The man lost control of his car and did everything he could to keep it straight, but he smashed through the guard rail, over the embankment and down into the ravine 50 feet below. The car was upside down on the edge of the river. The rain continued to pour as night had only begun. It was not until the wee hours of the morning that anyone was aware of this accident. By then it was too late. The couple had either been killed on impact, or drowned as the rain brought with it more water than usual for the little river.

I think of this when I drive. Around corners, near guard rails, near rivers and lakes. I visualize them surviving the fall. Stuck in the cold, trapped in the car, holding hands, holding hope, until the inevitable flood finds its way in. I picture them looking into each others eyes. Although their is fear, their is also love. Their is a look of gratitude for what they have given each other, the lives they have lived, the path that has brought them here. And then...the water comes.

After the wreckage and broken glass is removed, the guard rail fixed, the trees they broke on the way down have regrown, their is only one thing left as a reminder they were even there that day...


Burning rain, Cold heart
lights from the black and whites paint the dark
And the cracks in the concrete and the muddy water that they cry
Shadows wake up before the night

And the lines on the pavement couldnt keep him in
blood soaked lies left inside of the guilt covered skin
And the tracks on the street, where he tried to keep it straight
The big sleep, its gonna keep me off your train

Down the banks to the rocks at the bottom
Tumble inside of the car covered coffin
Close your eyes for the last time and picture a face
the big sleep, its gonna keep me off your train

upside down, a wreck in the river
Lie there cold and quiet with her
hand i hold, watch her shiver
feel her soul, fade and flicker


And all thats left..is a roadside cross


Thanks for taking the time to read my blog and walk this little journey with me.

Till next time
North Easton
www.northeaston.ca